Drone use has skyrocketed in the last few years, especially in the public sector. The applications of drones in public safety offices are endless. Between drones for fire departments, law enforcement, and other public safety divisions, drones are becoming more and more common.

This is especially true for law enforcement. There has been a huge increase in police drone use and it doesn’t seem like it will be slowing down anytime soon. This is largely due to the high tech features offered by drone manufacturers, such as DJI, that develop high-end commercial drones that outshine your average box-store drone. 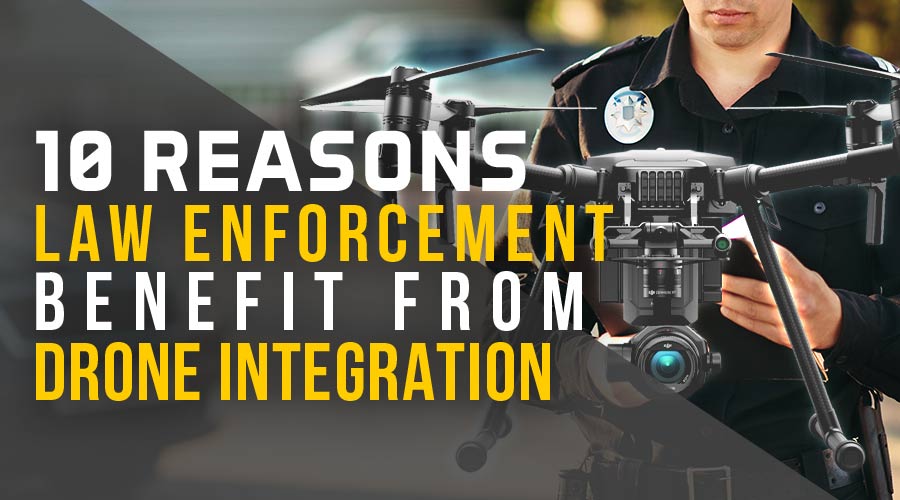 Drones used by these public safety officials are equipped with high tech thermal imaging capabilities, optical zoom, and other advanced features. All of which are designed to help gather intelligence, survey potentially hazardous situations, and solve crimes faster. The emerging technology provides new ways for law enforcement officers to protect and serve communities.

With proper drone training for law enforcement, there are dozens of ways that police departments can benefit from drone use. These are just a few of them:

After an accident, investigators recreate the event to determine the cause, who was at fault, and other details. This generally requires photographs to be taken on the scene, details to be recorded, and evidence to be collected.

Investigators have a short window of time to gather all of this information and return to an office to analyze it. The problem is that during that short investigation time, crucial details can go unnoticed.

Drones allow the investigators to gather video footage and photographs of the scene to later run through a software that allows for a 3D reconstruction of the event.

Crowded events such as concerts and other large gatherings pose a significant challenge to law enforcement. These congested events make scanning for suspicious activity, health emergencies, and criminal activity nearly impossible due to the density of the crowds. For an officer patrolling the area on foot, it’s easy to overlook problems without proper visibility.

While the average drone user is prohibited from flying over crowds, the FAA will allow for exemptions and waivers in special cases. Nevertheless, many leading drone manufacturers are equipping drones with cameras that have amazing zoom capability, such as the ZenMuse Z30 camera 30x optical zoom. This allows law enforcement to keep the drone flying at a safer distance while still getting amazing close-up viewing capability from the sky for a more efficient response to the problems. This improves overall safety and minimizes panic amongst crowds.

Large cities especially deal with highly congested streets. High traffic poses safety issues for the community by increasing the risk of accidents, reducing the ability for people to evacuate, and other problems.

With drones, police departments can survey traffic situations from above and use those insights to redirect traffic from highly congested areas to other parts of the city.

On the same note, law enforcement uses drones to monitor suspicious activity from 300 feet in the air without drawing attention to themselves. This way, they can avoid compromising the safety of themselves and innocent bystanders by assessing the situation and determining the best course of action without alerting anyone of their presence.

Arguably one of the most groundbreaking advantages of drone use by law enforcement is the ability to investigate active shooters inconspicuously. From a distance, law enforcement officers can monitor suspects and active shooters. This allows them to gain key intelligence and formulate a strategic approach to solving the problem. The added insight and real-time information that drone monitoring provides allow dangerous situations to be controlled quickly without putting law enforcement or anyone else in unnecessary danger.

Along those same lines, drones offer mapping features that allow for the identification of exits for evacuations and entry points. This can be used before entering a dangerous or hostile situation, such asin the case of a shooter. Gaining a better understanding of a location before arriving on the scene allows officers to plan the safest and most efficient solution. By finding the best way to confront a dangerous situation or prospective threat, they can minimize their chances of unintentionally escalating the situation or unknowingly putting themselves in harm’s way.

Analyzing a crime scene on the spot is challenging. Within a short time frame, investigators need to gather as many details and possible to later reconstruct and solve cases.

Similar to accident reconstruction, law enforcement uses drones to photograph and map crime scenes which allow for comprehensive reconstructions of the scene later on. With this, investigators can essentially return to the crime scene, allowing them to review the area in detail.

Catastrophic events such as; major floods, hurricanes, and earthquakes cause serious damage. Destruction of houses, buildings, vehicles, and other large structures not only disrupt communities but cause major accidents and even deaths. Often, there are people stranded in collapsed buildings, on top of cars, and other hard to find places.

Due to storm damage, search and rescue and emergency personnel find it difficult to locate and help victims. Drones allow police officers to survey the scene from above. They can take in information on damages, hazardous situations, and even find missing and stranded citizens.

On top of that, news sources can use drones to record footage used to alert neighboring towns and communities of the impact of the event.

Following that line of thought, search and rescue missions are nearly impossible to conduct on foot or with a vehicle on the ground. The difficulty of the situation only escalates as the target area expands.

With drones, law enforcement can fly the vehicle above the target area and use thermal imaging to locate missing people faster. This allows victims to get the medical attention they need faster. The increased visibility that drones provide can be the difference between life and death for the victim.

Aside from that, this method reduces risk and increases safety to first responders and search teams. It also allows them to deliver small items such as cell phones for communication and life vests.

All-in-all the benefits of drone integration for law enforcement allow for groundbreaking work to be done safely and efficiently. The development of drones with advanced zoom and thermal imaging capabilities by DJI and other manufacturers continue to evolve to help law enforcement. Communities, large and small, benefit endlessly from the time saving, efficient technology that allows police departments to do their jobs better.

That’s our Top 10 Reasons Law Enforcement benefit from Drone Integration. With all the amazing options, efficiency, and safety that drones can provide law enforcement, it’s no wonder the number of police departments integrating drones is steadily increasing with no sign of stopping.

If you have any questions, please feel to contact us. We’ll be more than happy to assist with any questions you may have.

Our drone training for Law Enforcement and public safety agencies alike is fully comprehensive. If your police department is completely new to drones or looking to acquire advanced drone training, our expert team is ready to help.

OUR EXPERIENCE
Steel City Drones Flight Academy has traveled coast-to-coast, providing professional hands-on drone training for both Police and Fire Departments. Our Law Enforcement drone training experts understand what your team needs and how to get your public safety agency flying drones in no time!